Martin,” AMC), and Walt Willey (“Jackson Montgomery,” AMC). Could there be

Dreams, Sonia Blangiardo leaves us guessing, but teases, “Yes, there will be

to Daytime Confidential’s Jamey Giddens, and shortly after, longtime friends and 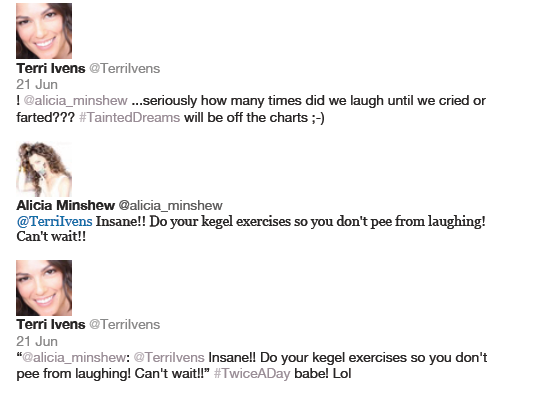 When asked about the Twitter exchange, Blangiardo replied, “Tainted Dreams

explores what goes on after the director says, ‘Cut,’ and that includes every thing

from the giggling, inside jokes among best pals to full-blown backstage

Machiavellian mayhem and everything in between. Reuniting so many former

trying to recreate with Tainted Dreams.”

According to Blangiardo, “Ivens will play the role of ‘Kassandra Bentley,’ an inyour-

face, manipulative actress who stars in Tainted Dreams’ soap within the

her portrayal of “Simone Torres” on ABC's daytime drama All My Children, but

she has been an entertainment professional since the age of 10. As a teen, she

worked with Matthew Perry on FOX's Boys Will Be Boys, Neil Patrick Harris on

and Mariel Hemingway on ABC's Civil Wars. She also had pilot spin-offs for

Roseanne, Baywatch and Married with Children.

Additionally, she serves as co-producer of the upcoming film Borrowed Moments

Ivens will air at 9 p.m. in L.A. and midnight in New York. Ivens has also recently

Tainted Dreams begins filming in and around NYC in late July.

Back
Listen to internet radio with MomsThoughts Show on BlogTalkRadio