We learn this week that Alexis had to look up the definition of the word “bully” ...to make sure she wasn’t crazy.  Alexis, I think the fact that you are under the care of a psychiatrist and taking serious medication is probably a better indicator of whether  you are indeed crazy.

There was a LOT of discussion last week as to whether or not Alexis is bullied.  Everyone is entitled to their opinion.  Based on Alexis’ assessment alone, she too bullies people!!  Actually, everyone on all the Real Housewive’s shows is a bully by that definition.  That is what the shows are about!  They are paid to bring drama and stir up trouble with each other.  They are paid a lot of money to do this.  Why this is such a shock to Alexis is beyond me.  Surely she has to know that being the focus of the show is a coveted position! She wants us to think she was a lone victim but she showed up with her “team”! It wasn’t like she was unfairly ganged up upon.  Tamra, Heather and Gretchen have a different perspective than Vicky, Lydia and Alexis.  To me, that is not unfair or bullying.  That is just grown women behaving badly for a big fat paycheck.

The fact that Alexis needs counseling and requires serious medication to participate in this show is quite frankly ridiculous.  I think if a licensed medical doctor is writing her prescriptions so she can participate on a really silly pointless tv show, he/she should have his/her licensed revoked by the medical board!  Heather is absolutely right, there are a lot of reasons people require medication, Alexis’s rich girl problems should not be one of them.  (Has Conrad Murraynot taught these doctors to the stars anything?) 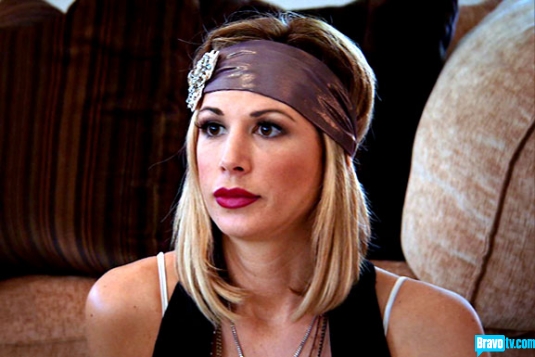 Crazy is as crazy does.

Alexis is full of contradictions and hypocrisy .  She says she isn’t crazy but she sees a psychiatrist and takes medication in order to do a tv show (sounds crazy to me)  She says she is a victim of bullying, but she led the charge against Vicky 2 years ago!  She is always talking about how religious she is and how God is on her side, etc...yet she lives a life of gluttony and excess.  Last I checked, gluttony is a sin.


I am not a fan of Alexis.  Do I think they all act badly at times?  Absolutely!  That is what they DO!  That is why everyone watches the show!  I will concede this about Alexis though:  Her hair is great.  Is anyone else sick of seeing the long, straggly, fake, blonde, hair extension look?   Alexis gets the “best hair” award so far this season in my book. 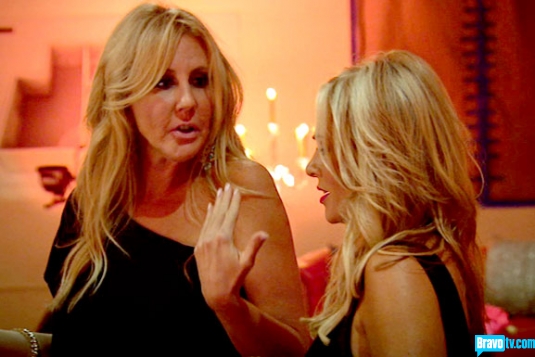 
Ok, enough with the bully talk.  I am so bored with it.  Let’s talk a little bit about how Vicky’s son won’t let his mother know where he lives!  And how this seems ok to Vicky!!  How can this not be a GIGANTIC RED FLAG to her?  Has it not occurred to her that perhaps she has screwed up her relationships SO much with both her kids that one is in hiding from her?  This is a very selfish woman with very serious control issues pretending it is normal for your children to go into witness protection.  Everything she speaks about revolves around her.  Everything, in her mind, is directly a result of her.  She doesn’t see her children as separate beings, just as an extension of herself.  The creepy way she was fondling and stroking Briana’s hair while talking about how deeply she loved her gave me the heebie jeebies. 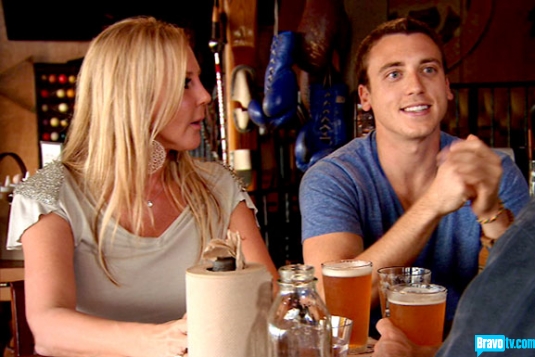 Vicky and Michael meeting in a public place so as not to reveal the location of his residence.


Let’s talk a little about Tamra.  She has clearly caught the bug.  The “stir-up-drama-to-sell-crap" bug and she has got it bad.  I think all this nonsense and over-reacting by Tamra is just her vying for position as the “lead housewife”, to get more press and of course to sell more crap.  She has a gym she needs to fill with members and wine to sell!!  Sooner or later they all learn this and it becomes sport to them.  At first I thought her and Eddie might be having relationship issues, but now I am convinced this is all just part of her (contrived) storyline.  They will allude to little issues all to make us wonder and fret about whether they will actually make it down the aisle!  And then in the end, we will all tune in to see a magnificent wedding.... awwww.  Am I right?  Is anyone else with me on this theory? 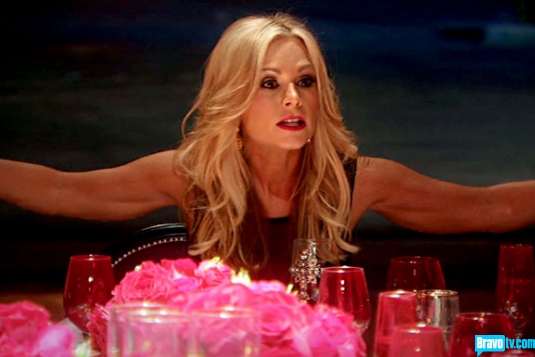 Notice this choreographed move to show off her toned arms...makes you want to go to a gym, doesn’t it?

I am now sort of obsessed with Lydia.  New girls are always the most interesting.  (And I do mean “girl”...doesn’t she seem to be about 15 years old?)  As the new girl, she hasn’t caught on to the whole “just bring drama and don’t worry about being real” thing.  Lydia is still being authentic and its so darn cute!  Next week we find out more about her hippie mom who thought she was a tree!  I am excited. 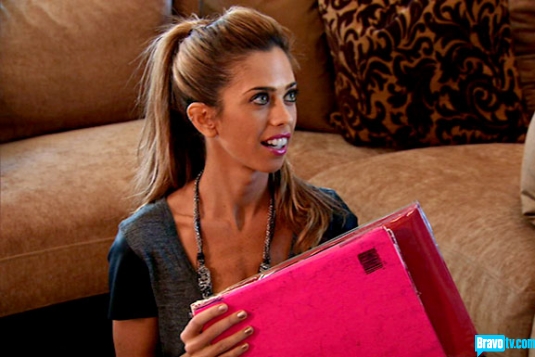 "So, like in homeroom today there was this really cute guy...."

What was your favorite part of the show??  Share below!