Homepage > Peter And The Starcatcher

Peter And The Starcatcher 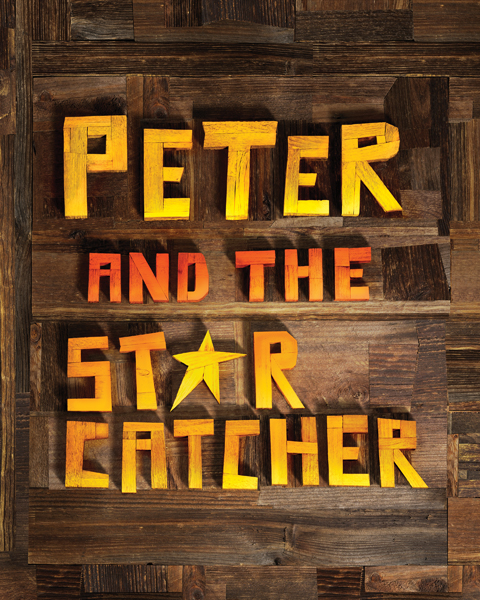 I will admit, I went in without expectations of greatness.  Don't get me wrong,  I knew it would be good.  A  show doesn't win five Tony's awards if it isn't good, really good.  But, I have seen a lot of children's shows over the years and my taste these days leans more towards edgier, adult content.

I was expecting a children's tale.  I was delighted to learn I was wrong.  Yes, Peter and the Starcatcher is the prequel to Peter Pan, but this story is told with a bawdy silliness somewhat reminiscent of Monty Python's Flying Circus. ( I almost expected John Cleese or Eric Idle to appear on stage at any moment!)  Needless to say, I am a huge fan of British humor and Monty Python so Peter and The Starcatcher was right up my alley.  Apparently the audience shared my opinion, as the laughter was loud and frequent all night!!!

The fanciful tale, based on the novel by Dave Barry and Ridley Pearson, is full of imagination, adventure and action.  The set, while intimate, is intense and packed with detail.  The cast of 12 fill the stage and at times, become one with the set!  The clever staging and choreography is absolutely one of the highlights of this production provoking wonder and awe.

For me, the standout performances of the evening were the hilarious, outrageous and incredibly physical Rick Holmes who plays Black Stashe and the charming, endearing, adorable and appropriately understated Jason Ralph who plays Boy.  Every member of the cast performed brilliantly and earned every penny of the price of admission!  This show is very physical and full of action.  There is music, singing and an orchestra but I would not consider this a musical.  It is a drama with music.  I will admit there were a few lines here and there I missed because so much was happening, but it didn't take away from the overall experience.

Peter and The Starcatcher is playing at New World Stages Theater on 50th St.  There are plenty of parking garages nearby.  A lovely courtyard with fountains, outdoor seating and several restaurants is located right next door to the theater.   I highly recommend arriving early and enjoying dinner al fresco before the show!  I have attached below the press release for Peter and The Starcatcher.  It is full of all the wonderful details about the show and most importantly, TICKET INFORMATION!  GO SEE THIS SHOW!

On a personal note, I would like to thank Ken Wirth (production), Katherine Wallace (Stage Manager) and "The Boys" for the very informative "talk back" after the show!  I would also like to thank Culture Mom Media for tickets for to this performance.  All opinions are my own.


WELCOME BACK TO NEVERLAND!

Peter and the Starcatcher won five 2012 Tony Awards (the most of any play of the 2011-2012 season) and was recently named one of New York Times, New York Magazine and New Yorker’s Top 10 Shows of the Year.

This imaginative prequel to the story of Peter Pan, based on The New York Times best selling Disney-Hyperion novel by Dave Barry and Ridley Pearson, tells the tale of an orphan who heads to a faraway land, where he finds love, friendship, and, ultimately, himself. Peter and the Starcatcher is comprised of a company of twelve actors playing more than a hundred unforgettable characters, all on a journey to answer the century-old question: How did Peter Pan become The Boy Who Never Grew Up? This epic origin story of one of popular culture’s most enduring and beloved characters proves that an audience’s imagination can be the most captivating place in the world.

Peter and the Starcatcher will embark on a national tour, opening in August 2013 at the Ellie Caulkins Opera House in Denver, CO. The play’s Tony Award-nominated directors, Roger Rees and Alex Timbers, will direct the touring production, which will be represented by The Road Company.

CRITICAL PRAISE FOR PETER AND THE STARCATCHER

“Sensational! Showbiz at its most infectious!”

“"The most exhilarating storytelling on Broadway in decades."

“Mr. Rees and Mr. Timbers have created a theatrical world that’s so high-spirited, so inventive, so smart – it’s a hell of a lot of fun!”

“A treasure chest of pleasures!”

“Magical! An infectious balance of broad gags with cheeky adult humor. In an era of mainstream entertainment in which audience imagination is too rarely a requirement, it's a breath of salty sea air.”

“Sweet enough for kids, sophisticated enough for grown-ups, this play with music was both a valentine to the innocence of childhood and the magic of stagecraft. Bravo to the directors Alex Timbers and Roger Rees for infusing Broadway with starstuff.”