This episode was a very revealing to say the least.  There was a lot to be learned about two couples in particular. 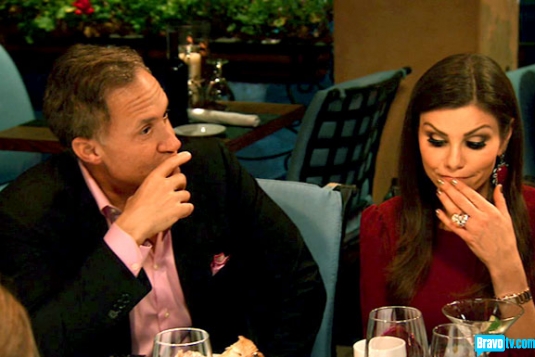 Heather and Terry.   This is a complicated situation.  I really feel for both of them.  Heather is feeling the stress every mother feels at least once.  She is pulled in many directions and trying to make it all work.  She is an actress and wants to continue working in her field.  She has an amazing opportunity to work on the hit show “Hot in Cleveland”.  She also has four children for whom she is responsible.  Her husband has a very successful plastic surgery business.  He provides very nicely for his family.  In order for Heather to resume her career, even part-time, she is going to require 100% commitment from Terry.  And why shouldn’t she?  She has given him 100% commitment, right?  Surely, she can rely on him to curtail his career for a week so she can pursue her opportunity with “Hot in Cleveland”.   After all, she all but abandoned her career for the past 10 years or so for him.


When she tries to discuss this with him,  he jokes.  His jokes are very passive aggressive.  People use this type of humor to express what they know they can’t just say outright.  He knows he needs to be there for her, he just doesn’t want to be.  So he uses this passive aggressive humor to vent.  This allows him to say “I was just kidding”! But, then he takes it further by intentionally bringing the kids into it.  This is infuriating to Heather.  I really get it.  She has a lot on her plate and Terry is telling her (thru his passive aggressive jokes) that he is not about to make this easy for her.


As mothers, we need to know our children will be cared for properly.  We can’t do anything if we think it will negatively impact our children.  She needs to know Terry will take this seriously, step up, do what has to be done to make this work.  Instead he is already telling her he is going to create bedlam and there will be a price to pay.


I like the way she conducts herself.  She never loses her shit and but she conveys how upset she is with him.  He obviously got the message because he genuinely seemed sorry when it came up at the dinner with everyone.  He seemed so overwhelmed by guilt that he felt the need to “confess” and purge his soul of his bad deed.   I appreciate that he seemed genuine in his remorse.  But, he should have realized that  indulging in a confession to ease his conscience was not going to do anything to help his situation with his wife.  I wish he would have thought that through a little more.  He seems a little impulsive.  Impulsive is not a good trait for a father, surgeon, or anyone in front of reality tv cameras.


His confession that the “D” word (divorce) had been thrown out there only made for a really awkward dinner party. Talk about a buzzkill.  Heather was embarrassed, the others (at dinner and at home watching) felt terribly awkward.


My unprofessional opinion?  Terry needs to quit with the passive aggressive jokes and deal with issues like a man.  He needs to discuss things with Heather and he needs to step up.  Heather is entitled to a career too if that is what she wants.  She makes it very easy for him to go to work every single day, he needs to make it easy for her the few days she goes to work. 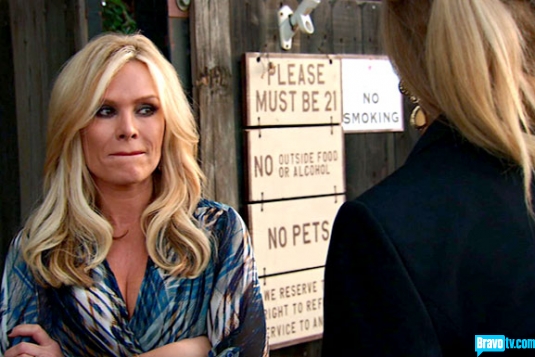 Tamra and Eddie.  Tamra attempts damage control with a well thought out “conversation” with Eddie.  That whole dinner with the sake seemed so contrived to me.  I don’t believe they waited until they went out to dinner with cameras rolling to have that conversation. Do you?   And I don’t believe that Tamra uses her meanness to protect her own tender heart. I think she says what she says because she means what she says.  I don’t always disagree with her either.  It would probably be more productive, however if she found a nicer, more professional, more mature manner to resolve issues. We know Tamra can discuss “feelings” because we have seen her do it in other seasons.   I don’t think her “poor wounded me” conversation with Eddie had the desired effect with the audience.  Let’s just call her Capt’n Backfire. 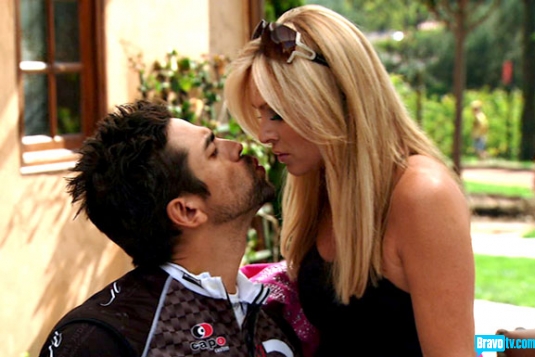 And Eddie....Last night was so revealing to me.  I see him in a completely different light now.  He seems very disingenuous and manipulative.  I think it is beyond rude and selfish to insist on his stupid 4 hour bike rides.  Why bother even going with Tamra on the trip if he is going to spend 4 hours on a bike ride with Slade,  make the group wait for dinner and then ultimately miss the group dinner anyway?  There was one particular camera shot, when he sat down at the table, after his bike ride, all sweaty and gross, that was very revealing. He had a moment of smugness that flashed across his face. That changed everything for me.   He is someone who is very selfish.  I think we are starting put all the pieces together now to see who Eddie really is.  He is selfish, he is controlling with all his rules and he is not going to marry Tamra.  Why won’t he participate in the planning of his wedding?  Why won’t he commit to a wedding date?  Did he propose to her just to secure his place on this reality show???  Tamra, call off the wedding.  Forget a spin off show, its not worth it.  I am not saying you should break up with Eddie, but call off the wedding and go to counseling instead (besides, that would make a better spinoff anyway). 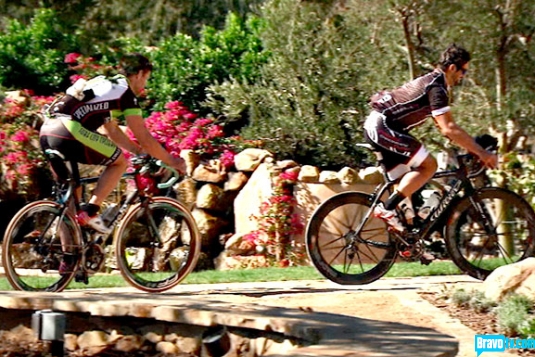 Perhaps all of Tamra’s anger this season is misplaced frustration from her relationship with her fiance??? 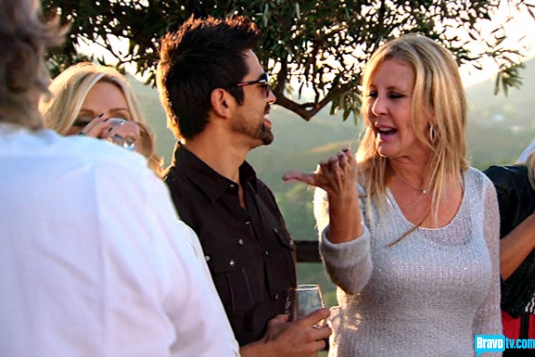 Vicky.    Vicky is still doing weird Vicky.  Why does she say stupid things like “I thought you  two were a couple” to the father/daugher at the vineyard? What is the point of asking that?  And then trying to justify it by saying “I know you all were thinking it”!  Perhaps they were Vicky but they had the good sense not to SAY it!  And then she kept going on and on...only making it worse...much worse.  She is one odd duck.  That is all I have to say.  She is one odd duck. 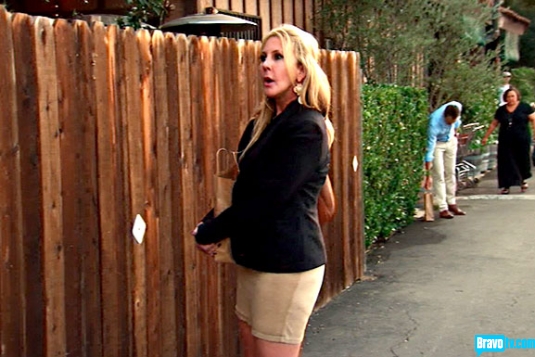 The exchange with her daughter at her office also seemed very “staged” for me.  I can totally picture Vicky calling Briana and  telling her to come to her office and tell her exactly what to say.  “You need to say that I am the business woman and that I had dinner plans for 3 months”  Can’t you imagine Vicky insisting on this in order to have an opportunity to rebut Tamra’s accusations of being a terrible business partner?   ugh. boring.

Oh and p.s. Vicky, I have been single for almost 7 years officially, a lot longer than that unofficialy.  There are a lot of women who are single, working and raising a family on thier own.  Your crying and pouting about staying in a room at 5 star resort alone is just irritating. (You're not even alone at the resort, just alone in your room!)  Do you know how many women would kill for a night alone in a luxury hotel room?   Please try to remember you wanted the divorce.  Suck it up.  You seem out of touch with reality, selfish and bratty. 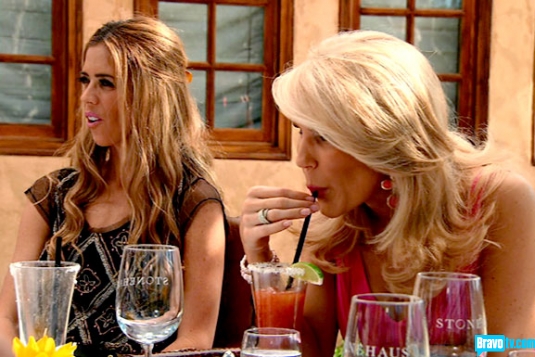 Gretchen.  Her lips look ridiculous and her helmet head hairspray looks cheap.  Not much else to say about Gretchen this week.

Lydia.  We learn that the Peter Pan of the group actually parents her hippie Mom.   Lydia is still the reigning champ of rationality in the absurd world of Real Housewives of Orange County. 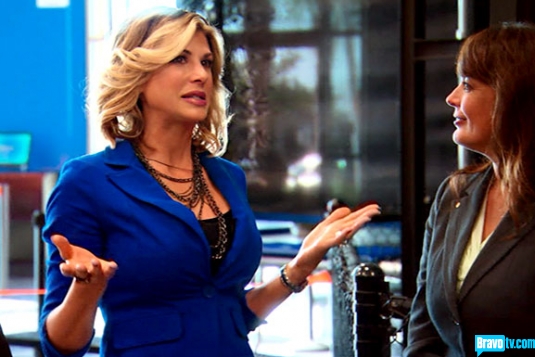 Alexis.  We learn Alexis is still bizarre. She wants her husband to get hair plugs.  ick.  (Perhaps she should have Eddie donate hair.  I bet Eddie could grow enough hair in an hour to keep Jim’s head covered for years!) Previews reveal Alexis is now going to be an actress!!  YAY!  What a novel idea!  It’s not like any of your castmates are actresses.  Good for you Alexis!