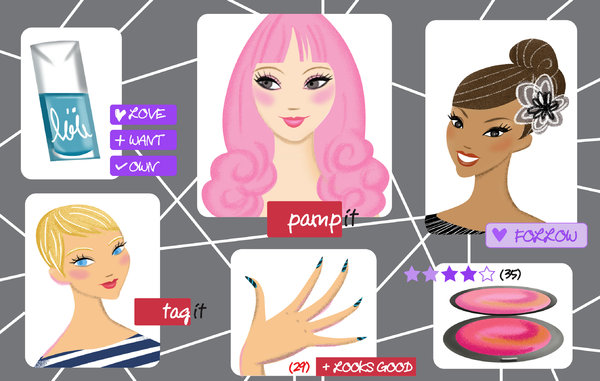 Quietly introduced at the end of February, Pampadour says it has already signed up more than 3,000 users, many of them beauty professionals. The site has joined a small but growing number of social platforms that allow members to tag and review cosmetics with others in their network, potentially shifting power from traditional retailers.

Among them are Bloom.com, which has accrued about 250,000 members since it started in August 2011. Like Pampadour, Bloom allows users to upload pictures of hair, makeup and nail looks they’ve created, as well as tag the products they’ve used in those looks. But Bloom, which boasts a database of 50,000 products from 700 companies, is also able to direct members to Web retailers where some of those products may be sold.

“It is designed to connect the dots and make beauty simple,” said Julie Mahloch, a founder of Bloom, based in Omaha.

Two sites in Britain, SheSaidBeauty.com and Baobella.com, went live in July 2012 and March 2013, respectively. The chief executive of SheSaidBeauty.com, Ben Aronsten, said his company has several hundred thousand viewers a month, half of whom live in the United States. SheSaidBeauty features the popular Beauty Shelf, which allows users to tag their favorite products as well as the ones they want to buy. (Benefit High Beam Highlighter, a shimmering pink fluid that comes in a nail-polish-like bottle, has earned high marks.)

Sephora, the retail chain, runs BeautyTalk, a social network, on its Web site. Members of the network are awarded 1 of 36 rankings (among them, “newcomer” and “hall of famer”) based on how many answers they respond to on company-moderated message boards and how many other members “heart” those responses.

The company, which declined to say how many customers belong to its social platform, gives so-called super-users advance information on new products and Web site changes before others, but no other compensation for their efforts.

Some users spend more than 30 hours a week on the site, said Bridget Dolan, a vice president for digital marketing at Sephora. “It really is about social credibility,” Ms. Dolan said. It’s also about sales: she said BeautyTalk members tend to spend significantly more at the company than other online customers.

According to Kline and Company, a market research firm in Parsippany, N.J., sales of beauty products in the United States reached roughly $40 billion in 2012, 4 percent of which is estimated to come from online transactions, up from 2 percent of overall sales in 2010. Donna Barson, a senior associate with Kline, said part of that increase is because of manufacturers’ efforts to replicate the in-store experience, which includes live chats with experts, instructional videos and tools that let you upload photos to digitally experiment with a lipstick or eye-shadow color. “Originally when customers started shopping online, they were buying for replenishment,” Ms. Barson said. “Now they are trying things they’ve never tried before.”

Indeed, friends’ posts on Pampadour.com inspired Vanessa Heshima Sims, a hairstylist who works on the television shows “Girls” and “Deception” in Los Angeles, to buy a Tom Ford blush and Tarte facial oil for herself and a Leonor Greyl hair mask to use on clients. Kendra Stanton, a makeup artist and blogger (citizensofbeauty.com) based in Portland, Ore., found a teardrop-shaped, spongelike makeup applicator called Beautyblender while combing through posts on Bloom .com. The product, Ms. Stanton said, has since become one of her favorite tools, one she’s touted on both television and the Internet.

Rea Ann Silva, Beautyblender’s founder, said the applicator’s popularity on social media sites had proved significant. “It opened doors to retailers,” she said. “It turned the skeptics into believers.”

Even when a product invites negative feedback, it can still be constructive, as Dr. Dennis Gross, a dermatologist in New York with an eponymous line of skin-care products, can attest. Some users posting on Bloom.com and other sites about his Alpha Beta Peel wanted it to deliver results more quickly, while others who hadn’t tried it feared it could irritate their skin. In response, the company introduced an extra-strength version.

“This new landscape is really a marketer’s paradise,” said Kendra Kolb Butler, a senior vice president for Dr. Gross’s company who oversees a team of employees that manages the company’s presence on social media platforms, adding: “You can listen to thousands of women without ever having to leave your desk.”

A version of this article appeared in print on May 2, 2013, on page E3 of the New York edition with the headline: Online, Everyone Can Be a Makeup Critic.